Liverpool is a fascinating, multi-faceted city. The name brings to mind musical brilliance, sporting prowess and a rich maritime history. More recently, it has come to be associated with exciting architectural projects, leading fashion brands, entrepreneurial activity and a rush to embrace contemporary city life.

"Liverpool people are famous for liking clothes and fashion; they are very social and lively people…"

It is now nearly a decade since Liverpool was crowned European Capital of Culture and the city has gone from strength to strength in that time. Site of the Tate Liverpool for nearly 30 years and home to the renowned Liverpool Biennial arts festival, the city's creative credentials are beyond repute.

As well as its cultural offering, Liverpool has a thriving, service-based economy, which was worth £29.5 billion in 2015. The city is leading the UK's Northern Powerhouse region in terms of its overall GVA growth and its growth of GVA per capita. The opening of Liverpool ONE – the UK's largest open air shopping centre – in 2008 gave the city a significant boost, when it became one of the top five most popular UK retail destinations.

"Over the last two years the core Liverpool City Region economy has recorded the strongest growth of any Northern Powerhouse core city region, in both overall GVA and per capita terms (based on NUTS2)."

Tourism plays a key role in Liverpool, worth £4.3 billion and encompassing 62 million annual visitors, according to VisitLiverpool. The tourism sector supports more than 51,500 jobs across the city.

Figures from CV-Library demonstrate the opportunities available in Liverpool. The city showed job growth of 19.9% in March 2017 compared to the month before – the strongest increase of any city in the UK.

With a rapidly growing, youthful population (22-29 year olds in the city centre increased fourfold in the decade to 2011, according to Centre for Cities), Liverpool is a melting pot of entrepreneurial talent. Many larger firms and funders have recognized this. Santander started its first business incubator i n Liverpool, while Launch22 opened its first non-London incubator there.

A growing population and plenty of blossoming talent, backed by strong economic credentials and a buoyant housing market make for an ideal environment for opportunity, boosting Liverpool up the list of cities to watch most closely in the UK over the coming months and years.

Hometrack's UK Cities House Price Index listed Liverpool as the ninth fastest growing city for house price growth in the UK in 2016. The northern city achieved year on year growth of 7.0% during 2016, with growth of 3.0% in Q4 alone. The latest update (September 2017) shows respectable year-on-year growth of 3.2%.

One of the reasons for Liverpool's sustained property price growth is the pace at which demand for properties in the city has outstripped supply. Liverpool's population fell steadily from the 1930s until the early 2000s, when a resurgence of city living saw it increase from 435,500 in 2001 to 466,400 in 2011, according to Census data.

The 5.5% increase in Liverpool's population in the decade to 2011 marked a turning point not just for the city itself, but for the UK as a whole. Across the nation, city living has become more sought after, with key urban areas experiencing a sudden yet sustained turnaround in their declining populations after the millennium.

The pull of the UK's cities on young professionals seeking economic opportunities has put pressure on housing stock. At the same time, homebuilding in Liverpool is below the level required in order to meet demand. The Home Builders Federation puts that number at 3,000 homes per year, but only 1,700 new homes were started in Merseyside in 2014/15, down 27.7% from the year before. The situation worsened in 2016, with new housebuilding falling by 32.4% in the year to September.

"Over 3000 homes need to be built every year across Merseyside to meet projected housing need, a level that has been consistently missed."

As Liverpool's population to continues to increase, construction needs to pick up the pace in order to ensure that the city's housing needs can be met. And while supply continues to lag behind demand, prices look set to continue rising.

"Liverpool City Centre's population has now grown to over 33,540 living in over 14,000 residences. 2017 has continued to see the creation of more residential apartments, with over 1,000 units expected to have completed by the end of this year."

The UK is experiencing a decline in owner-occupier levels, with home ownership now standing at 65%, according to the 2015/16 English Housing Survey, which is carried out by the Department for Communities and Local Government. As ownership levels have dropped, the private rented sector has boomed. This is particularly true in the country's cities, with young professionals seeking out city centre accommodation that is close to the best economic opportunities and leisure pursuits available in their area.

Demand has pushed rents up in many areas. In the North West, rents rose by 2.3% in the year to Q3 2017, according to the Rightmove Rental Price Tracker, and by 1.3% in the last quarter alone.

Modern tenants are looking for contemporary properties that place them at the heart of the action. With expectations of home ownership in the UK significantly lower tha n they used to be, young professionals are instead happy to rent more luxurious apartments that provide them with on-site facilities and the convenience of city centre living. According to Centre for Cities, Liverpool's city centre population increased by 160% in the decade to the last Census (2011). According to the Liverpool Development Update 2017, they city centre population has now reached 33,540 people.

While those working in the city centre used to be happy with renting mediocre accommodation in the suburbs and commuting to work, with the goal of saving enough for a deposit, a tougher lending environment and the rate at which home values have outstripped salaries have allowed new build, city centre rental accommodation to flourish.

"Compared to 10 years ago 23.1% of renting households are couples, up from 13.9%, as occupants prefer to rent rather than the outright purchasing of a property with 44% of private tenants not expecting to buy in the long term."

This is particularly true in Liverpool, where Centre for Cities reports that those aged 22-29 and living in the city centre quadrupled in number between 2001 and 2011. Liverpool's established businesses have benefitted from the influx of talent, while keen young entrepreneurs have also built up a dynamic startup scene in the city. The change has also benefited property investors, with buy-to-let apartments in Liverpool now an essential part of the city's accommodation offering.

It's not just tourists who flock to Liverpool, but investors too. T he city is home to a wealth of opportunity for those looking to invest in substantial projects, particularly those related to infrastructure and property.

"Liverpool City Region has recorded a strong economic performance over recent years and these figures clearly underline the progress being made to deliver sustainable economic growth across the city region. This is an attractive location for businesses to invest and they are doing so in significant numbers."

The fDi report also highlighted Liverpool's connectivity and business friendliness, placing it sixth out of all mid-sized European cities for the former and fourth for the latter. 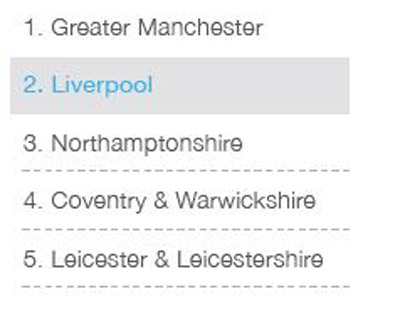 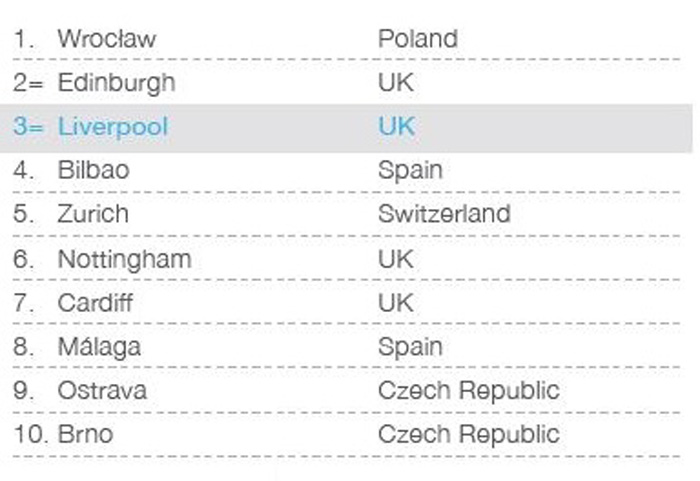 Investors seek safe, stable environments in which to grow their money, and Liverpool ticks all the boxes when it comes to what they are looking for. Office for National Statistics figures released at the end of 2016 showed that Merseyside's economy grew faster than that of any other similar major city region in Britain in 2015, including London. Economic growth stood at 3.1% for the year (Merseyside is the metropolitan county that encompasses Liverpool, Wirral, Sefton, Knowsley and St Helens).

"The levels of investment in our city continue to top £1 billion per annum. Since I came into office in 2012, we have seen over £4 billion investe d in new houses, roads, offices and hotels… Despite wider economic uncertainties t he fact is, confidence in Liverpool is booming. There are currently over 270 major new projects planned, with £14 billion worth of schemes in the pipeline. Indeed, the work we are doing with partners to develop the new £1 billion Paddington Village in the Knowledge Quarter and the Ten Streets Creative District will redefine Liverpool's economy over the next 30 years."

Looking to the future, the construction value of major schemes currently in progress totals £1.4 billion. Those developments are projected to create a further 2,680 new/safeguarded FTE job spaces, according to the Liverpool Development Update 2017.

Liverpool's digital and technology scene has played a key role in the city's economic prowess in recent years, with the Financial Times reporting that the city was home to a record number of start-ups in 2015, while the number of 'high growth' companies reached 56% in the six years to 2016.

With country-leading economic growth, and a status as one of the most exciting cities in Europe for FDI, Liverpool's appeal as an investment destination offers solid credentials for the years ahead.

There's plenty in Liverpool's future for the city's residents – and investors – to be excited about. The Liverpool City Region metro mayor was elected in May 2017, with key devolutionary powers giving the city gr eater flexibility to grow and shape its economy in response to local talent and opportunity. Over the next 30 years, the metro mayor will have a budget of £900 million at his or her disposal, with the powers of the office covering transport, health and social care, education and skills, and planning and housing.

Liverpool is already home to an ambitious regeneration project that will see the city continue to offer worldclass facilities to its residents as its population expands. In 2017, the British Music Experience Museum opened in the Cunard Building, the Royal Court Theatre refurbishment work continued and a range of major undertakings in the Ropewalks area of the city were completed.

The SuperPort Action Plan 2011-2020 covers £1.8 billion of new infrastructure developments, building on the city's rich maritime history. Liverpool City Region has projected that the works will add £18.3 billion of additional GVA by 2030, with up to 30,000 new jobs created.

"Retailers and manufacturers are increasingly seeking port centric locations close to large centres of population to base value-adding activities and distribution, reducing freight costs and duplication in the handling of goods and reducing the time goods take to reach the customer. Liverpool City Region, with its central position in the UK, and situated in the largest economic region in the UK outside of London, is an ideal location to take advantage of these tr ends, offering a cost-efficient, low carbon SuperPort delivering compelling, competitive advantages for business."

Liverpool's former International Festival Gardens forms another part of the city's far-reaching Liverpool 2020 Vision, with a 'cultural garden suburb' due for creation in the stunning waterfront location. The gardens have already undergone substantial renovation, with £3.7 million spent on them, leading to 200,000 visitors enjoying the 63 acres of tranquil green space since 2012. Additional development looks set to transform the site by 2020, bolstering the existing lake, woodland walks and calming Japanese and Chinese gardens.

With a £15 billion plan also in place to enhance road and rail connections in the Liverpool region, the city is perfectly positioned in terms of its future potential, with residents and investors alike benefitting from its dynamic, forward-thinking approach to contemporary urban planning.

We specialise in three main sectors:

We have various commercial projects that we are working on. This ranges from Hotels, Offices, warehouses and many more…

The student accommodation market continuously displays an appealing range of venture. With the demand still soaring, we reliably recommend this sector to our clients.

The market for residential property is expanding fast. With strong capital growth and high rental yields, this sector is very appealing.