Manchester is one of the UK's most well-known cities. From its distinctive accent to its political history to its contribution to the music scene, the city has played an influential role in the development of modern British culture. In early 2017, the city's Ancoats district was named by TravelSupermarket's Hip Hang-out Neighbourhood Index as the UK's hippest area – and the third coolest in Europe.

Manchester is a city which has witnessed a great many stirring episodes, especially of a political character. Generally speaking, its citizens have been liberal in their sentiments, defenders of free speech and liberty of opinion."

Business, financial and professional services, along with health and social care, form the backbone of Manchester's economy. It is the UK's main centre for business, financial and professional services outside of London. The city also has a thriving tech, digital and new media sector, while the Northern Quarter is making a name for itself thanks to its creative credentials. Digital and creative clusters in Manchester now employ some 63,500 people, responsible for £3.1 billion of GVA annually.

Manchester is tipped for rapid growth over the years ahead. Its population is projected to expand by 20% by 2025, reaching 625,000 residents, according to city analysts. Over roughly the same period, 110,000 new jobs are expected to be created, with residents' disposable income rising by 28% over the next decade.

In keeping with its cultural and economic importance and its growing population, Manchester has undergone significant regeneration in recent years. The newly completed Spinningfields district showcases the best of modern city planning, blending retail and leisure facilities into an area that proudly shows off Manchester at its best.

The city's drive to regenerate in line with its growth is benefitting not only those who live and work in Manchester but also those who invest there, creating some excellent buy-to-let opportunities. Manchester features regularly in lists of the highest yielding cities in the UK for rental returns, often beating every other location in the country as a result of the strong yields available. As at November 2017, the Totally Money Buy-to-Let Yield Map placed two Manchester postcodes (M6 and M14) as two of the highest yielding areas of the country, with yields of 8.25% and 7.98% respectively.

Rising prices and a rush to the city

Manchester's property market is enjoying steady growth, thanks to the swift increase of the city's population and a backlog from several years of housing supply. Figures from Zoopla as at December 2017 show that home values in the city have risen by 31.88% over the past five years.

Manchester, like many UK cities, experienced a decline in population towards the end of the last century. Its populace decreased by 6% between 1981 and 1990, and by a further 2.5% between 1991 and 2000, according to the Office for National Statistics data. However, the millennium marked a turning point for the city – its population grew by a staggering 22% between 2001 and 2013.

Such a rapid turnaround in population size is never easy for city planners to address and impacts particularly on residential accommodation. As a result of the sudden growth, Manchester is estimated to be around 40,000 homes behind the number it needs, with demand continuing to put pressure of supply. The Manchester Evening News reported that, as of March 2017, the city's population was growing almost 15 times faster than the rate at which new houses were being built.

Naturally, demand outstripping supply in this way has been felt by the property market. In 2016, Manchester property prices rose by 8.9%, the second fastest rate of any UK city, according to Hometrack's UK Cities House Price Index. It retained its second place position as at September 2017, with a growth rate of 6.5%. 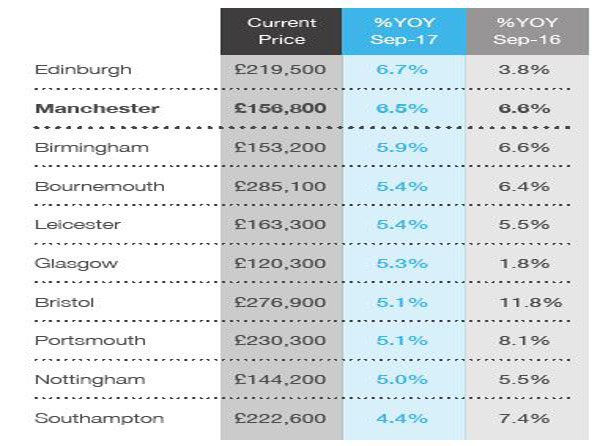 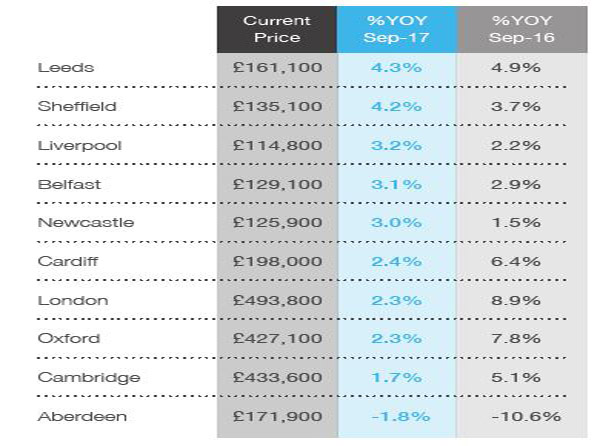 Another key feature of the Manchester property market is the value for money that it offers. The average Manchester apartments cost just over a third of the price of a London apartment, meaning that the northern city can allow investors to spread their risk across three separate apartments, for almost the same price as a single London investment property.

The sudden increase in population has meant that Manchester's city centre is expanding outward in order to accommodate demand from new residents and new businesses. This has created an exciting new wealth of opportunities for those interested in investing in property in the city, with new areas coming to the fore and offering strong returns.

Across the UK, levels of owner-occupation have been declining for many years. They stood at 65% according to the 2015/16 Department for Communities and Local Government English Housing Surveys. Home ownership has decreased due to prices outstripping salaries and the resulting burden that this has placed on those trying to save for a deposit. 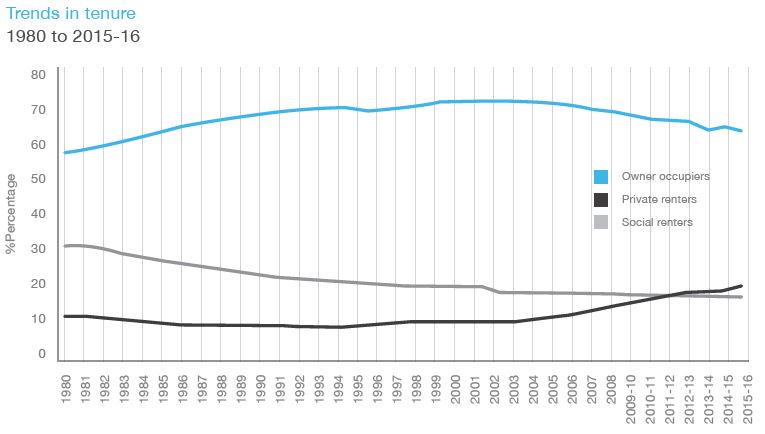 The decline in home ownership has led to a significant change in the makeup of city populations. City centre living has experienced a massive revival, with young professionals accepting that they can't own and instead opting for long-term rentals in sleek city centre apartments. Manchester has been at the forefront of this push for city centre life, according to Centre of Cities, with professional graduates under the age of 35 driving the growth. Over 33% of residents are young professionals, compared with 28% in London and 24.1% in Birmingham.

The shift in demand has changed the shape of Manchester's rental property market, leading two areas of the city to be included in the UK's top 20 postcode districts for buy-to-let by yield, based on Totally Money's November 2017 Buy-to-Let Yield Map. In addition, two areas of Greater Manchester were listed in Rightmove Rental Price Tracker's top five most in-demand areas outside Greater London, as at March 2017.

The push to live in city centre accommodation saw six applicants for every property in 2015, with many apartments let within 72 hours of being put on the market. By mid-2016, Manchester was at the top of the Lendinvest Buy To Let Index, thanks to its yields of 6.8% – the highest average returns in the UK.

As at December 2017, the average asking rent in Manchester had hit £1,338 pcm, according to Zoopla. Apartments command significantly higher rents than houses in all size bands. 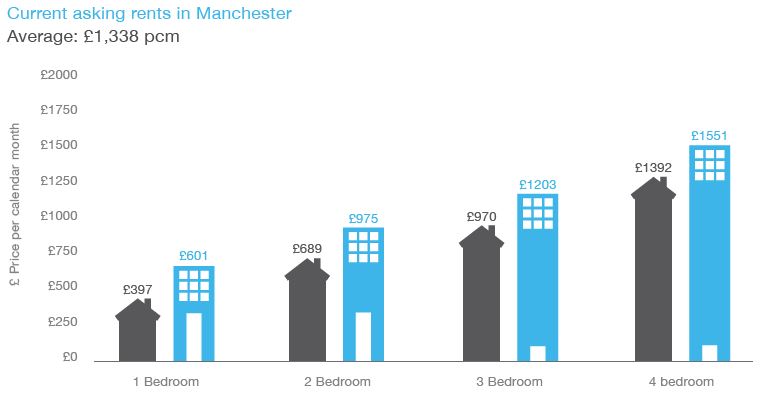 With JLL projecting rent increases of 4.2% across Manchester over the coming five years, and the city being home to one of the highest proportions of private renters in the UK (at 26.85%), Manchester offers solid credentials as one of the most promising buy-to-let locations in the UK.

Finances and foreign investors - Manchester has it all in order

The UK's economic and political stability means that it is viewed as a safe haven for investors from around the world. Manchester, meanwhile, stands out within the UK as an investment hotspot thanks to its strong economic credentials, solid house-price growth and excellent potential for returns.

The Greater Manchester economy is of huge regional importance, accounting for 40% of total GVA in the North West, according to New Economy's Greater Manchester Key Facts report. Meanwhile, the Globalization and World Cities Research Network has ranked Manchester as a beta world city. It is the highest ranking British city aside from London. As such, economic opportunities abound for international investors as well as for those within the UK.

Manchester's local government takes a forward-looking approach to attract foreign direct investment. The election of the first Greater Manchester mayor in May 2017 and the devolution of the ci ty's powers should ensure that it remains active in attracting a broad base of investment from around the world.

Figures from the EY Attractiveness Survey 2016 emphasize the importance of this, showing that Manchester has topped the table of UK urban areas attracting foreign direct investment (FDI) every year since 2009. Of the 98 projects that the northwest recorded as attracting FDI, 54 of those were in Manchester. The software, business services, construction, and retail sectors have benefitted particularly, with the US, the Netherlands, Germany and France topping the list of investors.

"Manchester has been the leading recipient of FDI among England's major urban centres in every year since 2009."

Manchester's rapid growth since the millennium means that its metropolitan economy is now the second biggest in England. That growth has been so rapid that, in 2015, the Manchester Evening News reported that the city was growing faster than Paris, Tokyo, and Dubai. Manchester's skyline is awash with cranes as its economy goes from strength to strength.

The announcement followed an initial commitment of £7 billion in 2014 from the UK Chancellor of the Exchequer. Local initiatives funded through the Northern Powerhouse scheme will include the improvement of transportation links and urban growth. Liverpool, Leeds, Sheffield, and Newcastle will also benefit from the initiative.

The largest transportation initiative set to benefit Manchester over the coming years is the HS2 rail network, which is due to majorly cut journey times between a number of key UK cities. The second phase of the project, which will see trains operating around 2033, will reduce the journey time from Manchester to London from the current 2 hours 8 minutes to just 1 hour 8 minutes. Mancunians will also enjoy swifter access to continental Europe as a result of HS2, with the journey time from Manchester to Paris cut to 3 hours 38 minutes.

In addition to the Northern Powerhouse, Manchester is benefitting from a £10 million innovation fund designed to boost small to medium enterprises in Greater Manchester and Cheshire. There's also a £6 billion fund to reduce congestion on northern roads and enhance connectivity.

The future is certainly bright for Manchester. The council's chief executive, Sir Howard Bernstein, revealed his vision of the city's future in March 2017, outlining an ambitious plan for an underground travel system, more primary schools and public spaces, and pockets of city centre parks.

"I've been in Manchester for 10 years and I've watched what has happened, I think it's clearly one of the most attractive cities to do business and for families to live. It has some of the best universities attracting a great student population, and as it becomes more successful it will continue to grow and people will see it as an alternative place to live."

In January 2017, Manchester city council also granted planning permission for the Factory. The flagship northern cultural venue is expected to add 1,500 FTE jobs and £1.1 billion to the city's economy over 10 years, with construction beginning this spring. The development – on the site of the former Granada TV studios – will form part of the new St John's neighborhood, which will recognize and enhance Manchester's creative and cultural credentials.

With Manchester's housing, transport and leisure pursuits all set for significant attention and investment over the coming years, the city certainly offers an exciting prospect for investors who want to be part of the future of one of the UK's leading cities.

We specialise in three main sectors:

We have various commercial projects that we are working on. This ranges from Hotels, Offices, warehouses and many more…

The student accommodation market continuously displays an appealing range of venture. With the demand still soaring, we reliably recommend this sector to our clients.

The market for residential property is expanding fast. With strong capital growth and high rental yields, this sector is very appealing.